I watched the movie "Hills Have Eyes".

In conclusion, I said, "Wooooo. It wasn't as grotesque as I thought it would be."

However, the disgusting scenes and the development of a sense of panic and horror that made me nervous were interesting.

I'll tell you what I think with spoilers.

Summary of the movie "The Hills Have Eyes 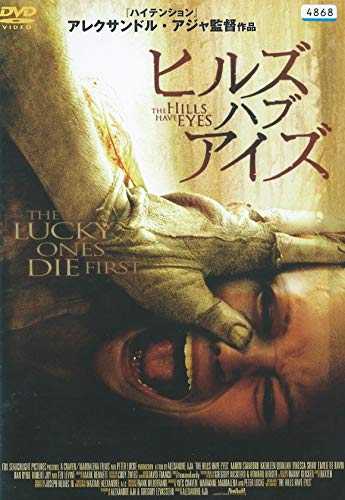 Hills Have Eyes [out of rental].

A remake of "Salandra" directed by Wes Craven. Directed by Alexandre Aja, who also directed "High Tension". Bob is traveling with his family in a trailer. On the way there, their car breaks down in the desert. Bob's daughter-in-law, Doug, heads out to call for help, but a family of god-eaters has crept into the family.

Spoiler for "The Hills Have Eyes"

We often hear about deformities caused by radiation, but is it a bit unusual to hear about a story about a brain going haywire? I guess. But if the brain is physically deformed, you can imagine that the thoughts are also twisted.

But, you know, movies about cannibalism like this, you know, lure people in, orStrange is only smart when it comes to attacking lol.

This time, too, he had a flat tire on his car and came up to us slowly and skillfully.

I was strangely calm and wondered if I could think straight at such a time. Well, if you are crazy in every way, you won't survive, will you?

Reminds me a bit of Texas Chainsaw Beginnings.

That one has the "ouch ouch ouch grotesque scary" feeling due to being cut up alive and the SAW-like splatter elements, but I didn't feel that at all with The Hills Have Eyes.

They attack people to eat them, but I didn't find the attacks particularly grotesque. It's still a scene that makes you want to cover your eyes, though.

However, the scene where he eats the parakeet made me blurt out, "Ugh...". That was disgusting.

Then there was the scene where he attacked the woman. That was also the most sickening and personally quite disgusting scene. I was so disgusted that even though I was crazy, I could still think like that to women.

Interesting!!!" I didn't think so at all.

Although the film is set in a cannibalistic setting, there were quite a few scenes of people eating (although there was a scene of one of the cannibalistic family members eating a leg), and if you watch it for the grotesque scenes, I think it would be insufficient.

Green Inferno is more amazing when it comes to the people eating scene. (Though it has a great B-movie feel to it.)

The only sane girl in the cannibalistic family, the one who finally helped them, was a nice twist, but I just felt a little sorry for her.

Personally, I don't have a lot of "Oh! I like this scene.

The music didn't really appeal to me personally, and although the atmosphere of the western movie may have suited the desert, I would have preferred a heavier, more disastrous music....

The Hills Have Eyes wasn't as gruesome as I thought it would be, and I doubt I'll watch it again.

It's been a while since I've seen Texas Chainsaw Beginnings lol.

Please take a look at this article, too

Human Insanity: Two movies with the theme of human body modification. The horrifying contents may make you feel sick.

The Final Dead series is more egregious than SAW. It's so foreshadowed that it makes you sweat...

Eh.... That form is so gross and creepy. 6 panic movies with mysterious creatures [Western].

Women are intelligent and powerful...I admire them. Introducing films about cool women.

Among them, I really like movies in which an intelligent woman defeats her opponent, or a powerful woman overcomes an enemy or a difficult event. So this time, I have carefully selected movies that portray such women in a cool way. Intelligent and powerful. I like movies in which women are ...
2018.01.18 2022.04.17

Jealousy and power...a movie where you can see a sordid female battle.

I have never seen such a sharp action spy movie. The cool suits and lean action are beautiful.

In this issue, I would like to introduce you to the movie Kingsman, which is too innovative with its kickass action and visuals of the ending. I have seen many spy movies so far, but this one has a slightly quirky atmosphere. Summary of the movie Kingsman The King...
2017.01.20 2022.04.17

[Panic piece] Quiet Place spoilers. Mysterious life forms in a novel setting are creepy. The mother's expression at the conclusion took it all away.

The movie Pooh and Grown-Up Me is a movie for busy people.

I watched the movie "Pooh and Grown-Up Me". I was wondering if different people would have different tastes, but there was one part of the movie that really hit home for me. I thought that the hint of what I really wanted to do might be hidden in "doing nothing"...
2018.09.15 2022.01.06

I watched Where the Soul Goes starring Ethan Hawke. Frankly, I am left with a question. It is difficult to sort out the various elements of religion, spirituality, environmental activism, love, and so on. The description of the ending is not very clear, so I'm just going to write down what I felt...
2019.04.29 2022.01.06

I have watched Sandra's Little House. The ending was a bit disgusting, but her resilience, her faith that she would never give up, and her strong heart that decided to protect her children made her a true hero. I also learned about the harshness of society, her shitty husband, and the negative effects of domestic violence...
2021.06.05 2022.01.06

The birth scene in the first 30 minutes is breathtaking｜A woman's opinion on Netflix's "The Puzzle That Is Me".

Foreshadowing Recovery and Message to Society｜Fight Club: The Movie Commentary

I watched The Quiet Place: Broken Silence. In the US, this movie was the biggest hit of all Hollywood productions since the Corona Disaster. In conclusion, overall, I found it interesting and enjoyable. To be honest, it was a bit of a tweak, but the hand-sweating...
2021.06.18 2022.04.27
[Detective Conan]Review blog | The Bride of Halloween. Different from the past.
[Updated 2022] Detective Conan Films of All Time: Ranking of the Most Interesting (my own prejudice)

Hello. Thanks for visiting my blog.

I'm a Japanese woman who lives in Kanto in Japan. I'm in my 30s and love movies and foreign dramas. This blog is multilingual. Due to automatic or manual translation, there may be some strange expressions. Also, the translation is being implemented step by step, so some sentences have not been translated yet. Please understand. (^ ^ ;)

I don't like to explain the contents of movies in detail, so I mainly write about what I, as an individual, thought of the movie and how I perceived it.

I tend to mention it from that point of view because I'm inclined to philosophy...
I hope it stimulates your senses a bit🌸.

And if you don't mind, follow me on social media! 🕊.

I update articles and mutter about movies, dramas, and anime!
👇👇

Your link clicks are my encouragement. Thank you for your support. Spoiler Alert: The Boy in the Striped Pajamas is a bad aftertaste, but it's one of the best movies to watch
I watched all 5 seasons of Paper House and I'll tell you what got me hooked on the show.
What is the appeal of Game of Thrones? Why I suddenly got hooked when I thought it was boring at first.
Recommended Thriller Films] If you want to feel the thrill and suspense of a thriller, these 9 films are the ones to keep in mind.
Spoiler alert: "Life" surprises with a surprise twist at the end. The mysterious creature's monstrosity is egregious.
タイトルとURLをコピーしました